When I was in school I knew a boy who believed in alternate universes.

We had Materials and Design Tech together in year ten, and he’d often find his way to my work bench where he would sit and discuss his theories with me.

Theory Boy believed that there could be an infinite number of alternate universes, each a slight variation on the other. On a day that I came to school with my hair in two braids there was another universe where I had only one, another where it was in a ballet bun and so on. Some timelines would only be slightly different, others worlds apart.

He’d sit across from me and throw out the endless string of variables that could exist. Eventually, his true motives shone through when he some how got the courage to suggest that there was a universe out there somewhere where we were together. An awkward exchange for all involved.

I haven’t seen Theory Boy in years now, but I sometimes still think of his alternate universes.

Universe One.
Medicine is not for girls.

In year eight I decided I wanted to study medicine.

I wanted to be a cardiac specialist.

I spent my spare time sketching diagrams of the human body, all labelled in my funny dyslexic-but-don’t-know-it-yet hand writing. I worked hard.

I gave up eventually because I was told I wasn’t good at maths and being a doctor wasn’t a good career for a girl like me. How would I look after my future children while working such long hours?

An unstable sense of identity. A diagnostic criterion. I fit it all too well.

When I was 12 I couldn’t decide if I wanted to top every class or tear my reputation to shreds. I’d study harder than anyone, only to spend my class time talking back and walking out when I’d had enough.

I’d eat my lunch on top of the cricket nets until I was spotted by the caretakers and dragged down for yet another talking to about respect and dignity. I’d quietly roll my eyes and ignore every word.

In year nine I hit a girl because she called me a slut. I also topped my music and writing classes.

I spent a lot of those years crying. No one asked why and I’d never say. 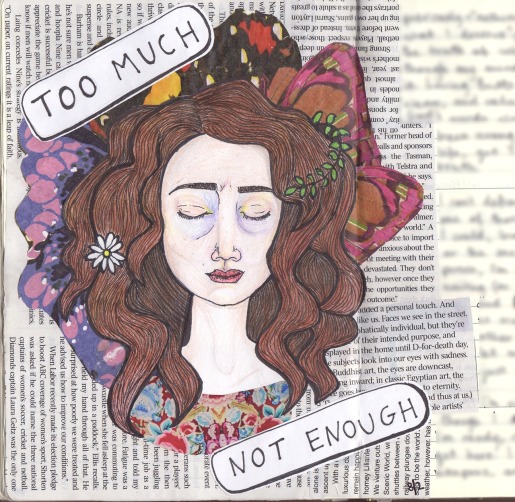 Universe Three.
No one stands so comfortably in fifth unless they are a dancer.

When I was seventeen I was a dancer. I put my heart into every step, I’d practise until my feet would bleed. I was going through a box of band-aids a week and my dedication showed.

At state premierships, I danced incredibly. I’m not one to offer myself much praise but that weekend I know I was good.

I placed first and when I spoke to one of the judges he said he couldn’t believe how far I’d come since the year previous. I’d placed seventh then. He said I was ‘one to watch‘. I’d never felt so happy.

Universe Four.
I could have had a home in Birmingham and a UK passport.

When I finished school I began auditions. I applied for acting schools in Australia as well as the UK. I was ready to pack up and leave. I would not have looked back. I had a house waiting for me in Birmingham with my best friend.

I ended up at Curtin University double majoring in Film Making and Performance. I wrote and directed a short film. I collaborated in an ensemble and created a half hour stage production.

I joined the Hayman Theatre Company. I wanted to finish my degree and move to the UK to work in television.

Universe Five.
I really did love my degree.

When I was eighteen I was asked if I would consider interning at my church. My brain said no because I loved my degree and my theatre family.

My heart whispered that I should go.

I almost said no to leaving following the most incredible performance I had the honour of being a part of.

God said yes. He spoke so clearly in my ear as I was caught in the rush of the stage door.

I could keep working where I was and continue to fake happy. Smile my way through audition after audition, survive on the temporary high of my creativity. I could probably be okay, I could keep working hard. My heart jumped at those words and I could see myself surviving with a painted stage face and a pile of scripts I’d written myself.

Solitary. Standing in my own strength.

That night while I was on the bus I quietly said goodbye to the university I’d begun to call my home.

Sometimes I think of the universe where I said no.

Maybe that’s why I love the idea of Theory Boy’s alternate universes: a hundred thousand different realities where I took a different path.

Every missed opportunity isn’t really missed at all, it’s playing on out somewhere in time and space.

Maybe I just don’t want to live in reality. I’m probably scared of the cause and effects I inhabit.

I think I’ll live in this world now.

I’ve looked back a lot, every time I scroll through my photos and see the saved snapchats from backstage, every time I get a facebook notification of Hayman auditions, when my best friend calls me at 4 am from the home overseas we could have shared together, when I open the medical textbook I treasured as a twelve-year-old.

But I can say now, with all of my heart that I am so glad I listened to that voice. I’m endlessly thankful that God chose to speak to me, a tired theatre student about to miss her chance at life.

I’m learning to look forward now. Christine Caine spoke about the courage to let go of the past, and slowly I am finding that, piece by piece.

But even as I look forward I begin to map out each different future. There’s so much out there and I am terrified.

I want to live in each alternate universe. I don’t want to choose.

Alternate universes make me feel safe, because no matter what path I fall onto, there is a different world where I’m on another. Somewhere out in space, I might be doing the right thing.

But, Theory Boy, though to my fifteen-year-old self your theories might have been convincing, I don’t think I believe in these choose your own adventure worlds. I just don’t think I do.

I think instead I have to learn to trust in a God that doesn’t need a thousand different worlds to get it right.

I think now I believe in here. Just here.

Which is terrifying, but what is trust without fear?

I think I might finally be happy to float in my own confusion.

I think I’m learning to trust.

(If this was the second time you’ve seen this post, sorry! I’ve had some technical difficulties and had to pull the first version down)